The Australian Golf Club?s Jake Higginbottom has coasted to victory in the 2012 Riversdale Cup with a 19-under four round total of 269.

A large gallery followed the 18-year-old Higginbottom who led the field throughout the tournament and finished seven shots clear of Daniel McGraw, from Queensland?s Gailles Golf Club, with Cameron Smith, from Queensland Golf Club, two shots further back in third place.

Higginbottom, with all four rounds under 70, set the stage for his impressive win with an opening round of 64, a score equaled in yesterday?s final round by McGraw.

The Riversdale Cup, which has been running for 117 years, is one of the two major Australian tournaments for amateurs.

The Australian Golf Club?s Jake Higginbottom has coasted to victory in the Riversdale Cup with a 19-under four round total of 269.

Coming off a 12 month break through injury, 21-year-old West Australian golfer, Whitney Hillier, has broken away from the field in the final round to win the Riversdale Cup with a six under total of … Read More
Read More » 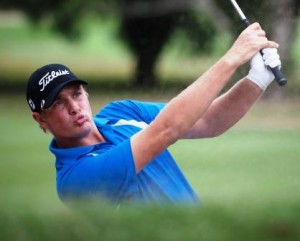 Our club is witnessing a rising star of the golfing world during this weekend?s Riversdale Cup.

Members can be part of the action by being there on Sunday to see if 18-year-old Jake Higginbottom, from The Australian Club in Sydney, … Read More
Read More »

At some stage last week the registration form for the Riversdale Cup Volunteer Spotters was taken from the down stairs foyer. All members who have offered to volunteer please have a look at the list here to see if your … Read More
Read More »